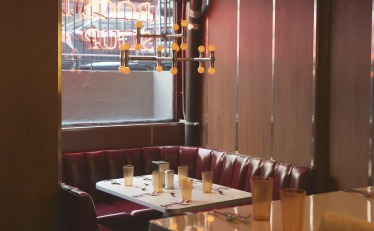 One of the booth tables at Rooster. There is also barstool seating. Photo Courtesy of Michael Persico

Federal Donuts is a popular food chain in Philadelphia that serves fried chicken, coffee, and donuts. Broad Street Ministry is a not-for-profit Christian organization that deals with homelessness, hunger, and other social issues.

Rooster Soup Co. opened its doors officially on Jan. 23, and has been doing very well so far. Co-Owner of the parent company CooknSolo, Steven Cook, said that business has been great thus far.

Broad Street Ministry Executive Director Mike Dahl said that the restaurant has been full every day since its opening.

The public has been largely supportive of Rooster Soup. Cook said that most patrons who eat there know what it is, adding that “the response has been great, people are happy eating there knowing where their money is going at the end of the day.”

The restaurant is open from 8 a.m. until 8 p.m., and serves breakfast, lunch, and dinner. “The menu at Rooster Soup will be anchored by Chef Erin O’Shea’s excellent, southern-inspired, homestyle cooking,” As their press release states.

Dahl said that the parent company CooknSolo had a lot to do with the creation of Rooster. CooknSolo is named after its two founders, Steven Cook and Mike Solomonov, who have launched many other restaurants together like Dizengoff, Percy Street Barbeque, and Abe Fisher.

The profits from the restaurant go to the Broad Street Ministry’s Hospitality Collaborative. “[The Hospitality Collaborative] is what we call it when we invite people in for a meal. But at the same time that we invite them in for a meal, they can get critical services. The idea of a collaborative is that it is not just Broad Street [Ministry] that’s providing the services, we have about fifteen volunteers a day. We also work with best in class non-profit partners for healthcare, legal services, housing, benefits, signup and the like.

The organization provides assistance to the homeless in many aspects. “Along with nutritious meals, guests can benefit from a mailing address, change of clothes, and personal care items,” The organization states.

The National Center for Charitable Statistics (NCCS) reports that there are over 500 nonprofit organizations and foundations in Philadelphia county. None of these organizations, however, have anything quite like Rooster Soup Co.

The idea for Rooster Soup Co. began with the fact that Federal Donuts throws away hundreds of pounds of chicken bones every week, and they felt they could go to better use. A Kickstarter page for Rooster, that began in 2014, raised almost $200,000 and Rooster opened its doors in January of 2017.

Dahl eloquently explained the significance of the unique project saying, “The thing I love about Rooster Soup is it shows just how powerful a combination of the nonprofit sector and the for profit sector can be. I believe you’re going to have to have these types of partnerships to really move the needle on the problems facing this city.”

All photos courtesy of Michael Persico and Rooster Soup Company