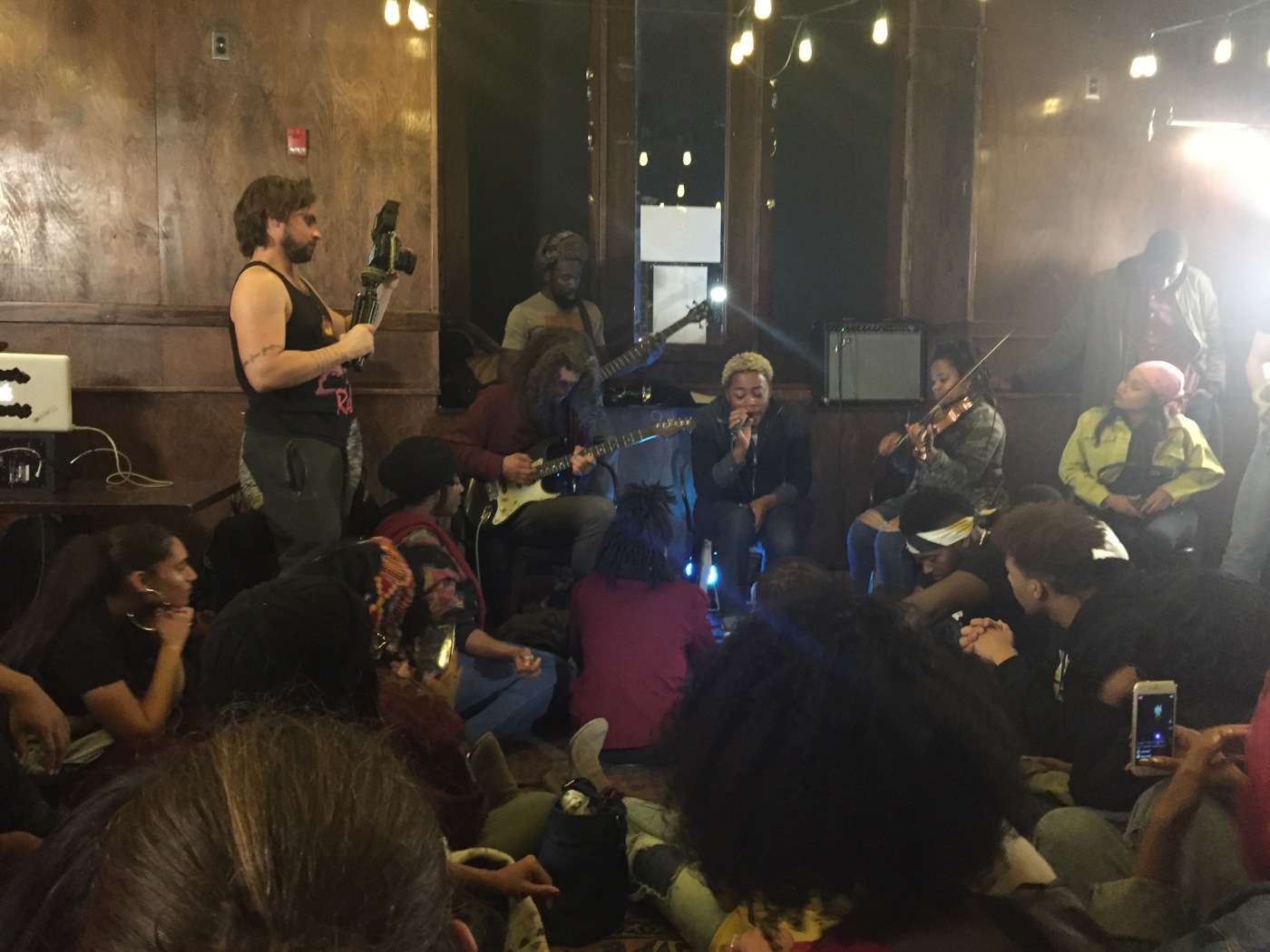 Outside of William Street Common, you could hear the soothing melodies of artists like Ashley Catanzaro who just grabbed the microphone from an artist sitting near her and began to sing soulfully behind Lyonzo Vargas, the co-founder of Global Village.

“Who wants the first mic? Who wants the second one? You ready! You ready!” Vargas shouts into the crowd of artists and new members of the Global Village family who decided to attend this month’s jam session.

During the “VLLG Jam Episode 23” in mid-November at 39th and Chestnut street in University City, local artists and team members from the Village family gathered together in the small, crowded venue to simply share their gratitude towards each other by jamming out together.

“Expressing myself musically has really guided me in connecting with other people,” Catanzaro said. “For awhile I considered myself to be a very introverted person and that kept me mostly to myself unless someone came to talk to me. From Global Village in particular, I’ve learned that once I’ve spent some time listening to live music or singing in a space where there are other people, I’m so much more at ease in starting conversations with the life all around me.”

Global Village, an entertainment and wellness company is bringing artists together with the one thing that unites all people together―music.

According to their website, the Village is a collective of artists with a community bringing light and healing into Philadelphia and the world.

The main goal of the company is to showcase local artists and their creative work. Global Village makes it their top priority to feature these artists in the best way possible by hosting jam sessions and other events to promote themselves. While promoting their art is the main goal, the Village also simultaneously connects the community of artists by making them feel like they are part of a bigger family.

Participating in jam sessions like these gives the artists a chance to promote themselves. The University of Arkansas  found that performing live and socializing with other artists is the best way to grow yourself as an artist since sharing your Spotify name will eventually help you gain more followers. There has also been a surge of revenue for musicians who use Spotify and Pandora because using these popular streaming services allows them to make a small income and a name for themselves.

Philadelphia is filled of aspiring artists who are looking to make their mark like native Philadelphian rapper Lil Uzi Vert, Meek Mill, Jill Scott, The Roots and the legendary Patti Labelle.

Artists who attend jam sessions like Global Village’s wish to be noticed by that one person who will make their dreams come true while also being surrounded by a community who genuinely cares about each other.

Global Village’s jam sessions might seem like they have been occurring for a long time because of their high attendance but it’s actually almost a year old.

The very first jam session occurred last January with very few artists or people who attended it. After the fourth jam session, Vargas saw that this idea would eventually take off and fill up an entire venue. It began with simply showcasing the local artists to creating this community of people who want to be around people who have the same energy as them.

Attendees such as Tise Thomas attends these jam sessions to mediate. “Jam sessions are like mediating like yoga, you’re coming alive, you come to vibe and support each other.”

Thomas isn’t wrong with how music could be therapeutic. According to the American Psychological Association, music has been recognized as an effective form of therapy to provide an outlet for emotions. Live music also excites and activates the body which is exactly what these jam sessions are all about. Music experts and psychologists agree that music has a way of enhancing quality of life while also promoting recovery.

“There’s always a peak during the jams that feels especially gratifying to me. Everything is so perfect in that moment. When the mic comes to me, singing and sharing in that moment is as natural as breathing. Then there’s another push of confidence that individuals are welcoming what we’re sharing in a way that feels good to them. It’s such an abundance of love energy,” Catanzaro said. “The second is to be the witness of another artist opening up and allowing us to share that vulnerable space with them. It’s so satisfying when they let go and let themselves be a vessel to the music. It’s incredibly inspirational and very humbling.”

Lyonzo Vargas created Global Village for that reason to “create that place where everyone felt like they were safe.” Vargas left his job in catering after realizing that his life had no purpose if he was not doing something he truly loved which is making and producing music.

Raph Jones, another co-founder of Global Village and General Manager of the company believes this company will continue to shape local artists and beyond.

“Global Village represents community at its highest form. It’s a place where inclusion is―no matter what, no one has to feel isolated. We have events where it is encouraged that anyone can participate, interact, and network with each other, without feeling inferior or superior to the next person. Society separates us, classifies us, and puts us in a box. We exist outside of that box. Together.”