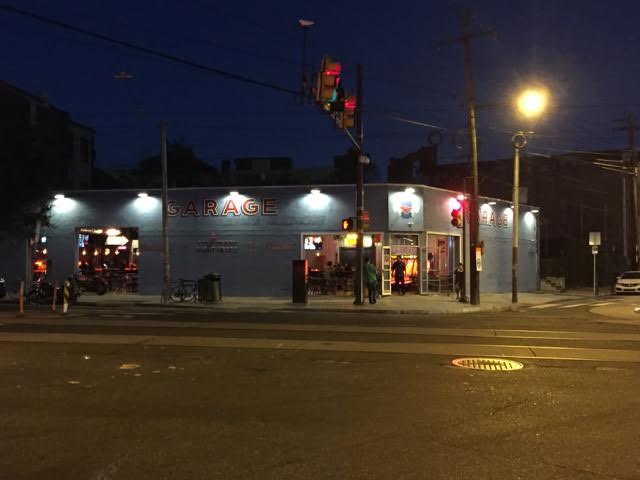 What began as a BYO cheesesteak joint in an old, abandoned garage has grown into a staple of Philadelphia’s bar culture.

Garage is a concept created by well-known Philadelphia restaurant owner Jason Evenchick, with other partners, who owns several successful bars in the city. Evenchick wanted to create a stripped-down, back-to-basics type of bar. The original location is in South Philadelphia at Ninth and Passyunk, right across from Pat’s and Geno’s Steaks.

According to Garage General Manager Justin Coen, the idea is so popular in this neighborhood that the owners decided it was time to open a second location in one of Philadelphia’s most growing areas, Fishtown.

“Not a lot of people come from up north to go to [the Garage] down south,” he said, “so we sort of wanted to share the concept with the northern side up here.”

Garage South started as a place to bring in your own cheesesteaks or other food, which coincided perfectly with Pat’s and Geno’s lack of indoor seating. Garage North at Girard and Frankford Avenue is also across from Joe’s Steaks, which Coen says was not intentional but “certainly serendipity.”

While the general concept of an authentic garage atmosphere remains the same, Garage North has been adapted to fit its new neighborhood. For instance, it was not constructed in an actual former garage, but in an old market that had been shut down.

The most noticeable difference in the new Garage is the sheer size of the place. It is much larger, and with that brings a bigger staff, more beer, an extra pool table, more garage doors and even a shuffleboard.

Garage North also has a full built-in kitchen, unlike the original location’s pull-in food truck. However, both continue to feature a calendar of guest chefs that changes on a week-to-week basis.

The northern location has similar decor, but with added details such as the front of an antique car on top of the kitchen and an old motorcycle hanging from the ceiling.

In addition to visual differences, the Fishtown area has brought in a diverse demographic of customers who are eager to take part in the Garage experience.

Bartender Rebecca Strapp has been working at Garage South for six months, and began working at Garage North at its opening this past August. She says there is a clear variety of clientele between the two locations. The northern bar brings in residents native to Fishtown and younger people who are continually moving to the area.

According to a study done by The Pew Charitable Trusts, Philadelphia has experienced a boom in the past 10 years of millennials ages 20 to 34. Fishtown is among the neighborhoods housing one of the highest percentages of millennials, between 30-39.99 percent.

The study shows that Fishtown has also seen one of the highest growths in its young-adult population since the year 2000 at 10.5 percentage points, the fifth highest in the city.

Garage is not the only business to follow the growing population to Fishtown, and it will almost certainly not be the last. The addition of several newer bars along Frankford Avenue in combination with older staples such as Johnny Brenda’s and Frankford Hall have transformed Fishtown into a drinking district to rival Center City.

Strapp says business at Garage’s new location has been even busier than they expected, and she believes that the development of the neighborhood will only cause the business to grow.

Coen agrees, emphasizing the geographical differences between the two areas of Philadelphia.

“This neighborhood is more of an up-and-coming, advancing neighborhood, where South Philly is very family oriented down there,” he explains, “Fishtown is a younger overall demographic, and there are more people in general up here.”

The popularity of Garage has spread as much more than just a place to sit, grab a canned beer, and eat a cheesesteak. It is steadily becoming an essential part of Philadelphia’s reputation as a unique city for dining and drinking.