Hard feelings of exclusion were of the community’s top complaints, along with fear that merging the small, niche, community schools would lead to less opportunities and resources for students.

The city cited low enrollment and poor performance rates as their reasons for merging the schools. Their hope was that one school would provide a larger variety of options for students and improve technological resources, such as computers, instead of taking away opportunities for students.

The protests managed to postpone the merger, which went into effect this year, for the 2016-2017 school year, as the new Kensington High School.

A future of hope

Advocates for the merger, such as Keith Bailey, the Manager of High School Programs at Congreso, says while Kensington High School is bigger than the other community schools it is still manageable.

He sees hope for the program, which he has been involved in through outreach and extracurricular programs with Congreso for the last 12 years.

Bailey says he has already seen enhancements at the new Kensington High School and that positive changes has been seen. Specifically, he says the school climate has improved.

“When you start making positive changes with school climate, you then start to see academic performance improve,” he said. “If students don’t feel safe in school, they’re not focused on learning.”

Congreso is a non-profit that advocates for Latino students by providing after school and summer programs that encourage success. Among their programs are English classes, which Bailey said many parents and students attend.

“I’m sure there’s a higher percentage that aren’t categorized,” Bailey said, “where Spanish might be the primary language spoke at home.” 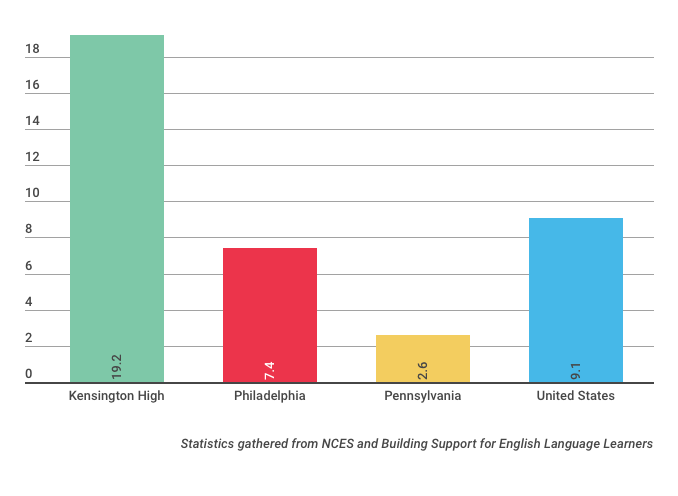 He said ELL classes, as well as Congreso’s supplemental programs, help Latino students improve their PSSA and Keystone scores, which are particularly low.

“Students who English is not their first language… being asked to complete a timed test where they have to translate and figure out the correct answers,” Bailey said, “you know you’re going to see lower test scores.”

In addition to ELL students, Bailey said 29 percent of students at Kensington High are in Special Education classes. In surrounding schools the numbers are similar, at 22 percent, but in other areas of the city they are drastically lower, at 9 percent.

A History of instability and disadvantage

Both schools were already housed in the old Kensington High School building, which was built in the 1900s. However, the programs were drastically different.

When Kensington High School first opened it was a school for girls. Kensington High became co-ed in the late 1960s and became the neighborhood-area high school. In 2005, it was split into four different school part of the “make school schools movement” in Philadelphia. The idea was taking Kensington High, which had more than 1,400 students, and splitting in into schools with a maximum of 400- creating a better student to teacher ratio and fostering closer relationships.

While the hope was to promote better attendance, performance rates on standardize tests, retention and to discourage inappropriate behavior, a 2009 report by the Annenberg Institute for School Reform still found a 70-percent dropout rate among Latino students.

The final reports that were released for Kensington Urban Education Academy and Kensington International Business showed similarities for Latino students.

In the Philadelphia School District 2014-2015 School Progress Report, Kensington Urban ranked last in terms of progress and placed 82nd out of 82 schools in the district. The district found that only 15 percent of Kensington Urban students had access for English Language Leaners (ELL), resulting in an “intervene” performance tier status for the school. Kensington Business placed 76 out of 82, and was given the performance tier ranking of 26 percent, placing them in the second lowest category under “watch.”

The scores for the new Kensington High School will not be released until the completion of the school year.

While education advocates see hope for the newly merged school, the former Kensington High School was problematic to say the least.

Brian, 43, who asked to omit his last name, grew up on Firth Street, next to Kensington High School. He attended Kensington High and focused just on getting his diploma, which he called “the piece of paper.”

“It was my philosophy to fail two times and get pushed up,” Brian said. “In ninth-grade they failed me a third time.”

So after ninth grade Brian dropped out. He got a job in the neighborhood where he continues to live.

Back at Congreso, Bailey feels that a lot of the difficulty students face are because of the demographics and nature of the neighborhood. He also believes that the gentrification of Kensington plays a role.

“When you’ve been at this for a while it’s interesting to see how a neighborhood changes,” Bailey said. “Kensington is definitely a neighborhood in transition.”

A change and future

Despite their challenges, Bailey sees hope for these students, specifically those who participate in Congreso’s programs.

He says many of his students not only graduate, but go on to college, primarily at Community College of Philadelphia and Temple University. Congreso recently partnered with Penn State Abington and is now encouraging students to apply there.

“A neat thing is that we had a group of students who graduated last June,” Bailey said, “and now, a lot of them are now college students working in our K-8 programs.”